The wonderful joys of Plume / Bloom

Bloom, also called cigar plume. Will occur when the oils on the surface of a cigar wrapper crystallize. Plume shows up in form of white powder or crystalline substance. Plume can easily be brushed off the surface of the cigar. Indeed, the presence of the crystals themselves do not affect the flavors of the cigar, but shows that the filler, binder, and wrapped have “Married” together. A visual indication that the cigar has been stored in the perfect condition for a long period of time. Unlike mold, which appears in patches, plume will appear evenly and over a large area of a cigar. Plume will NEVER appear on the foot of a cigar. Ever. If it’s on the foot, it’s mold.

Storing or ageing your cigar’s for a long time may be hard for many of us…. “I find it hard to keep my cigars inside my humidor for more than a month”

Often when I take a trip to Cuba, I like to stock up on some premium cigars like Romeo Y Julieta Wide Churchill which I will grab a couple boxes. Storing them properly inside a cigar humidor with Spanish cedar and a great humidifier will keep those precious cigars fresh. Our harsh Canadian winter months when I find it too cold in our Canadian climate to sit outside for an hour and enjoy my cigar the way I do in the summer months.

Here at Cigar Star we focus on quality. Highest grade Kiln Dried Spanish cedar is used in every cigar humidor and travel humidor which bares the Cigar Star brand. All of our cigar humidors come with transparent crystal humidifiers to ensure proper humidity level allowing the cigars to “merry” together creating a wonderful and pleasurable smoking experience. 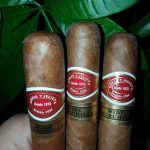